From Homeless to Hopeful

It's been almost a month since Frank Kolsut was hired as a permanent employee with Corteva Agriscience in a career he could never have envisioned for himself.

It's been nearly two years since he completed the administrative training program and took an entry level, temporary position with a company he never thought he'd work for

And it's been four years since Frank was living on the streets of San Francisco homeless, addicted, and near death from pneumonia and a dangerous blood clot.

"So much has happened for me in the last 4 years: something new, better, and different every year. Every December now, I look forward to what the next year will bring," shares Frank.

But is hasn't always been that way.

Both of Frank's parents battled their own addiction issues, and he was raised in and out of his grandparents' home until he was nine years old. In 4th grade, Frank moved in with his father who had just recently kicked his own addiction and remarried, and Frank was thrust into a new family unit. Eventually, things just got worse and worse.

"I had a lot of anger when I was younger and struggled to get along with my father and step-mother. We moved to a rural community, and I found the bad crowd who was experimenting with drugs and dropping out of school. My behavior was so bad that I was eventually kicked out of my house and my addiction escalated. By the time I was 20, I was using a needle."

Frank managed his addiction just enough to function. He was able to hold down low-wage jobs for short periods of time, trying and failing again and again to stay clean. But by 2015, Frank had burned his bridges with any family or friends who tried to help him and was living on the streets of San Francisco.

"I was a typical SF homeless kid. I was stealing to pay for any drug I could find, eating out of garbage cans, and sleeping in the park or on curbs. I didn't notice how serious my health issues were until I couldn't breathe and could barely walk. When I finally went to the hospital, I had pneumonia, strep in my blood system, and a serious blood clot in my leg. I was told they might even have to amputate my leg at the hip. I was at my absolute lowest when I woke up one morning to my sister, Alexis, crying above my hospital bed. She said, 'When you get out of here, you're coming home with me.'" 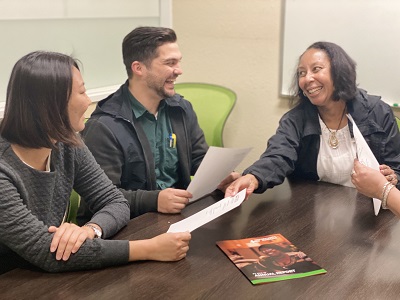 Thirty-six days in the hospital and a lung surgery later, Frank went home with his sister. "December, 2015 was my turning point. Alexis took a chance on me, and I wasn't going to waste it. It wasn't easy. I needed a year of physical therapy, and I needed to admit that I couldn't kick my addiction without help from a treatment program and a therapist to address some of the underlying issues I had always been battling. Two years after I left the hospital, my sister gave me the information about Opportunity Junction's administrative training program."

With limited work history, Frank's first employment opportunity after training was with a staffing agency. "It was hard working in a contract position, but I did my best and learned everything I could. When a permanent position opened, I applied and got it!" Frank is now working as an administrative assistant for Corteva Agriscience.

"Before OJ, I didn't know I could do this work or that I would be so good at it. I am now in a position with benefits and a real career path. My family is so proud of me, and I only see more success for myself. I am grateful for the time I spent at OJ and for the doors that have opened for me and my future."