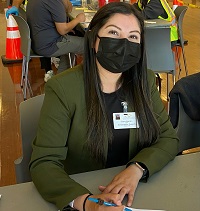 Diana Aleman, alumna of the Opportunity Junction Administrative Careers Training Program (ACT), has launched her dream career, been promoted, and started on the next steps toward her long-term career goals. In addition to climbing the career ladder, she has been using her renewed skills and confidence to bring resources to the community.

For years, Diana had worked customer service and retail jobs. She loved helping people and thrived in an environment where she had room to advance. Diana had been promoted to Department Manager when she began dreaming of working closer to home with a more consistent schedule to align with her family's needs. When the pandemic swept the nation, she made the decision to stay home with her three children.

Eager to take the next step in her career, Diana enrolled in the ACT to improve her computer skills and advance her career. She graduated from class 63 in Spring of 2021.

In March of 2021, Diana accepted a temporary position at Heluna Health as a COVID 19 Ambassador. When her manager decided to leave the company, Diana stepped up and started taking on more responsibilities. Her colleagues encouraged her to apply for the open Program Coordinator role, but she was hesitant.

Diana approached Hilarie O'Connor, Opportunity Junction's Alumni Manager, about the job opportunity. The open position required a bachelor's degree in public health and Diana had not even earned her high school diploma. As an immigrant and a young mother, Diana had plenty of transferable skills, and Hilarie encouraged her to shoot for the stars and apply for the role. She helped Diana freshen up her resume and prepare for the interview process.

In September, Diana was offered the role of Program Coordinator - the role previously held by her boss. She is now earning 50% more, working 60% remote, and spending more time with her family. She loves her job because she is building bridges between county resources and the community. Diana is finishing her high school diploma and aspires to get her bachelor's degree to work as a Public Health Coordinator long term.

Opportunity Junction helped improve Diana's writing and computer skills; as importantly, Diana claims a new confidence that has taken her from fear of public speaking to talking confidently to the media in her new job. Diana says, "If it weren't for Opportunity Junction and the amazing staff, I would not be where I am today. I wouldn't have been able to keep up."