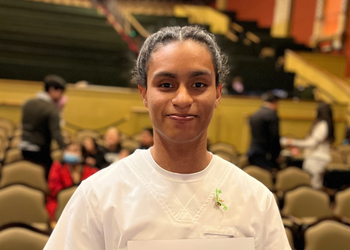 Christopher Ledgister was inspired to apply to Opportunity Junction’s Certified Nursing Assistant (CNA) program by his grandmother from Nicaragua. She was a registered nurse in her country and came to work in the U.S. in the same field.

“As a child, I spent a majority of my time with her because my father and mother would always work,” he said, noting that he lives with his grandmother, parents, sisters and great-grandmother. “I remember at nights, she would tell me stories of what she would deal with during the day, and a lot of stories of when she was in school, so I was interested in that.”

The Pittsburg High School graduate not only saw how his grandmother worked with people, but he went with her to doctors’ appointments for her own health issues. And even though he initially had plans to get into business management, Christopher realized he didn’t enjoy the work. He decided to try the CNA class.

He said two moments solidified in his mind that he had made the right choice. The first was when he found himself going home to share the new information he had been learning in class with his grandmother.

“I was actually able to explain to my grandma, and that moment just reminded me of the moments where she would tell me stories,” he said. “And just seeing the look on her face when I’m actually explaining to her what I’m doing…”

The second moment of confirmation centered around his great-grandmother and the information he was able to gain about her health. He said he was able to alert his family about possible symptoms.

“So I’ve been actually able to implement things that I’ve learned from school at home right off the bat to help a family member out.” 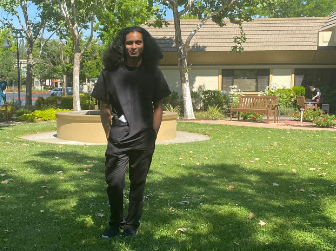 Christopher recently graduated from Class 2 of the CNA program. His long-term goal is to attend college and become a traveling RN, like his grandmother. He said he’s been grateful to Opportunity Junction for helping him build confidence in the educational setting.

Through experience from working with patients on-site, he’s already seen firsthand how CNAs can make a difference in the lives of vulnerable senior populations. He also urged others with an interest in healthcare to explore the career field where employees are in high demand.

“This field of work is shorthanded at the current moment, and CNAs are trying their best to provide the best care they can. At times, they don’t take their breaks, or at times, they actually don’t even take their lunch to try to help as many people as they can,” Christopher continued, adding that people should check out the field “if you have a feeling that you have enough patience, you have enough understanding, and you have that want to help others who can’t necessarily help themselves.”