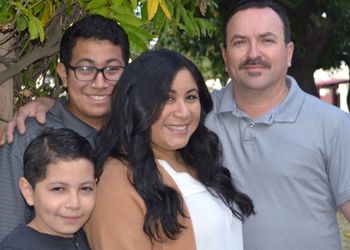 Maria Capote wanted more for her kids. Prior to coming to Opportunity Junction, she and her family of six were living off one income, and she longed for the ability to do more exciting things for her children to experience, such as traveling to new places. She felt limited in her ability to provide them with the lIfe she’d always dreamed of having for her family.

Then she heard about OJ’s Administrative Careers Training (ACT) program and applied in 2012. At the time, her children were still small, and the ACT’s schedule conflicted with her ability to care for them. Reluctantly, she put her plans on pause. Then in 2016, her mother retired and encouraged her to enroll in the ACT again.

“She told me, I can take care of the kids, Maria. Go apply!” Maria said.

While excited to join the program, Maria was also nervous. Technology had rapidly changed in the years that she’d had four babies, and she worried that there was too much to learn in a short period of time.

“Sometimes, I would start to think, ‘You can’t do this,’ but I had to stop myself,” she said. “I decided that I couldn’t even entertain such negative thoughts. I leaned into my faith and reminded myself that I could do it; nothing is impossible.”

Her own self-motivation, paired with a nurturing classroom environment, proved to be a perfect storm.

“Everyone was going through the same phase as I was,” Maria explained. “I realized I wasn’t the only person who didn’t know how to use this new technology. And I felt safe asking for help. My instructor, Norman Cheng, made me feel like there were no stupid questions.”

That positivity came in handy later when she was the last intern to land a job. She refused to give up. Then, Opportunity Junction CEO and President Alissa Friedman introduced Maria to Kathy Krumpe, who at the time had been the COO at Future State, which was later acquired by Accenture.

“Thanks to this introduction and a project I’d formerly worked on, Kathy wanted to work with me and basically created a position for me,” Maria said.

She hit the ground running and quickly made an impact on her company and team. Jennie Kay Banta,  Leadership & Culture Manager at Accenture, said that when she was a core partner to the Creative Team at Future State, Maria coordinated the traffic for creative support for over $20 million of client projects a year, as well as co-led the Inclusion, Diversity and Equity (IDE) efforts across the company. In addition to these roles, Maria led IDE storytelling education, as well as overseeing the IDE-check process for all created materials. She was also recently promoted to senior analyst for Accenture.

“Maria has been a pivotal partner for several client projects and is a constant inspiration to her enthusiasm toward and application of learning and connecting,” Jennie Kay said. “All this to say what Maria DOES is little in comparison to who she IS. Maria has consistently taken her lived experiences as education, built on them, and been able to genuinely effect change infused with both joy and deep care.”

Part of effecting change around her has also involved sharing her experiences with others. In the workforce realm, she said she tells her success story as often as possible – a story of starting out with an associate degree, going through the ACT program, and building a career that allows her and her family to truly thrive. She hopes that in spreading the word about how she found success, she can help reshape the employer perspective.

“I want people to know that you don’t need to hire only those with four-year degrees, and I want to change the landscape for future job seekers who might, like me, have more organic backgrounds,” she said, adding that she plans to be involved with committees who are supporting recruitment efforts to increase diverse talent in the workforce.

Now a board member for Opportunity Junction, Maria is leading the organization that first helped her land on her feet.

“It was definitely a full-circle moment, coming back home to Opportunity Junction to help guide it into the future,” she said. “I wanted a better life for myself and my family, and I just needed the chance. That’s what Opportunity Junction gave me – it opened a door for me that otherwise wouldn’t have opened. But just because I came through that door doesn’t mean I plan to shut it behind me. In serving the board and advocating for more inclusive hiring practices in the workforce sector, I hope to help others step through as well.”